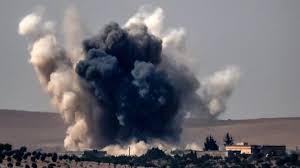 Nine Turkey-backed Syrian rebels were killed and 32 were wounded on Thursday fighting in an operation to push ISIS militants away from the Turkish border area in Syria.

The FSA fighters who were injured were reportedly transferred to hospitals in Turkey’s border province Kilis.

According to the Turkish MoD its warplanes hit 18 targets in the region over the past 24 hours, destroying 15 buildings used by ISIS fighters, while U.S.-led coalition warplanes killed three of the militants in air strikes.