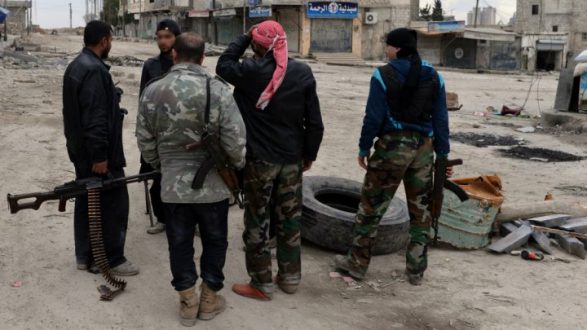 The region of Afrin continues to suffer from infighting between the Turkey-backed free police tasked with maintaining security in the area and Faylaq al Rahman group.

According to local sources, the free police servicemen demanded the militants of Faylaq al Rahman, who had been previously evacuated from Eastern Ghouta, to leave the houses where the militants were stationed with their families. When the militants refused, a conflict aroused and quickly escalated to a gunfight.

In addition to that, militants of Jaysh al Islam who were also evacuated to Aleppo from Eastern Ghouta have abducted a number of members of Hayat Tahrir al Sham (HTS) as well as Islamic State terror group.

6 thoughts on “CLASHES BETWEEN OPPOSITION FACTIONS CONTINUE IN AFRIN”