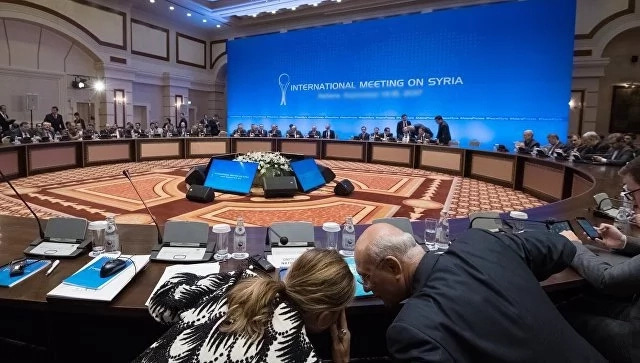 New round of Syrian peace talks took place in Kazakhstan’s capital Astana and brought a lot of positive results for the settlement of the crisis in Syria and the Middle East.

One of the most important issues discussed at the meeting was current situation in Syria, ceasefire, future of detained persons and implementing of all the agreements made by warring sides. The participants also discussed de-escalation zones, building mutual trust, humanitarian aid issue and coordinated the future steps to solve the crisis.

The guarantor states propose Russia’s Sochi resort city to become a new platform for discussing the Syrian crisis. But the opposition wants to continue the political process in Astana.

UN Special Envoy on Syria Staffan de Mistura said the 9th round of talks was positive and fruitful, he welcomed the commitment of the sides of conflict and guarantor states – Turkey, Russia and Iran – to settling the crisis in Syria and active cooperation with the UN.

The Astana meeting on Syria inded up with guarantor states issuing a joint statement reflecting the special meting on detained persons will take place in Turkey’s Ankara city, and the 10th round of talks to take place in Russia’s Sochi and  is scheduled on July, the precise date is unknown.

At the same time the head of the Syrian armed opposition delegation, Ahmad Toma, said the side of the conflict he represents will participate in the upcoming meetings on Syria in Astana only.

Syria’s authorities welcomed the results of the 9th round of peace talks in Astana.